Day 5 started with a bang. Literally!! Went to bed last night thinking ok, we have down time tomorrow. We can catch up on sleep, get my blogging done, clean the camper…  looking forward to the mental and physical rest.  Then at about 1:30 the thunderstorms started.  The loudest thunder and brightest lightening. I would have loved it but Joey was another thing, Scared to death. I mean crawl inside me scared. I comforted where I could but she wouldn’t even let me get up to get her a third of July.  After an hour I was finally able to get up and drug her, I mean get her a chewy.  It takes a few minutes to work so she paced the camper in the meantime. The storm had moved off some so now she wanted to go outside. She had to go (pee) and look around some, AT 3:00 AM.  Another round of thunder and lightening was coming so she finally came inside. By now the pill worked and she fell asleep, a dead sleep.  I however did not.  Not for at least an hour.  Let’s just say I heard the birds wake up.  Finally did go to sleep but up at 9:30. Sounds late but wasn’t to me.

Since it was going to be a lazy day 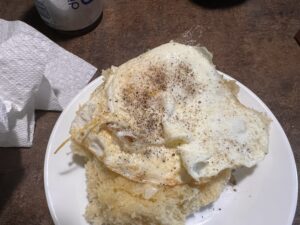 we just hung around camp walking Joey and sitting around a fire.  Made eggs and rolls for breakfast and I caught up on this blog.

The campground is part of the corps of Army Engineers 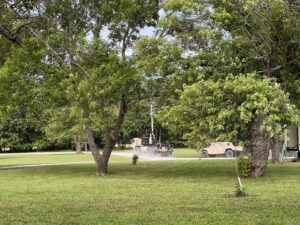 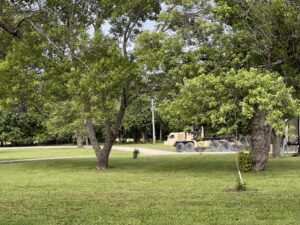 land and the camp host is a permanent resident.  Nice man.

Small campground, only about 25 sites but 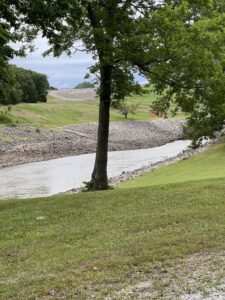 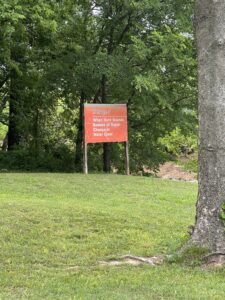 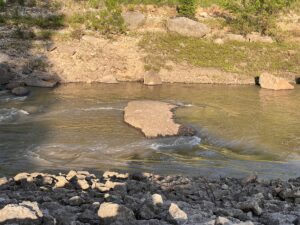 its right along a channel so lots of fisherman around.

On one of our walks we even saw an amadillo. 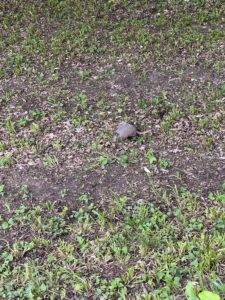 Cute and creepy all at once.  Joey wanted to make it a friend.  Nope, not happening, no way.  So she made friends with all the kids and other dogs instead. 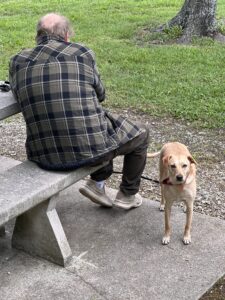 Very lazy day, not much more to report. I was able to clean the camper and blog, read and walk.  Went to bed early to finally catch up on the sleep. Tomorrow on the road again. Oklahoma here we come.