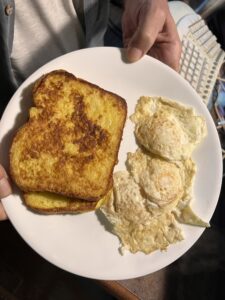 write my posts every night.  My old and feeble vacation brain can’t seem to remember with our days so packed. After a awesome breakfast of french toast and eggs, we packed up to head to Oklahoma.             Since we went rather far into Kansas to get our campsite 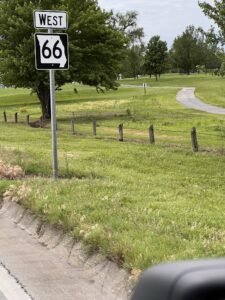 we had to backtrack a bit to get on Route 66 where we left off. So we went back to Webb City, Missouri to begin the next part of our trip.  Which almost immediately took us back to Kansas.  I know it sounds stupid. Why not just start from where we were and pick up Route 66 where we can.  I wanted to stay as true to the Route as possible.  And since it was Keith’s desire to stay in Kansas for 2 days he had to go back to Missouri again.         Now the Kansas leg of Route 66 is only 13 miles long 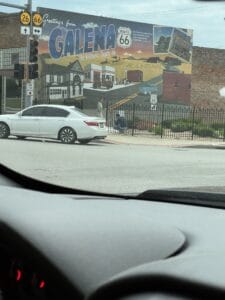 and you only go through 2 towns so this portion was really short. First town we can to was Galena. Small town, cute but not much to see.  I missed a picture but we passed the Service Station and car that was the inspiration for Tow Mater from the Movie “Cars”.  Wished I had gotten that one.           About 4 miles out of Galena Route 66 takes a 2 block 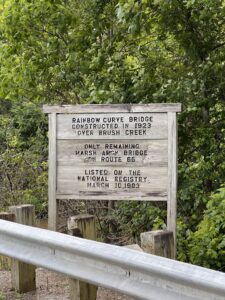 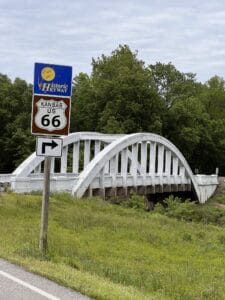 jog off the road to go over the Brush Creek Bridge.  This is the only remaining example of a “Marsh Arch” bridge on Route 66.  Bridges and signs are the biggest attractions along the route. The signs are infamous and the bridges are being abandoned and replaced with new safer bridges.  I tried to get as many pictures of each that I could.         After Galena and the Baxter Springs we crossed into Oklahoma. 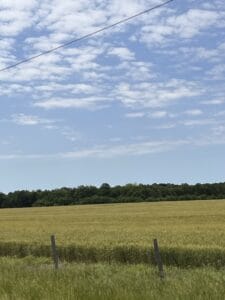 The landscape was more of what we expected to see along the route. Flat prairie green pastures and cattle.           First town in Oklahoma was Commerce with the Dairy 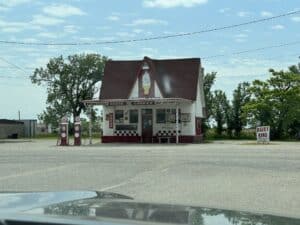 King (yes King not Queen. I guess they get one too). This is also where Micky Mantle spent his chidhood but we didn’t take the detour to his home.         Next was Miami (pronounced My-Am-Uh) and the Waylan’s 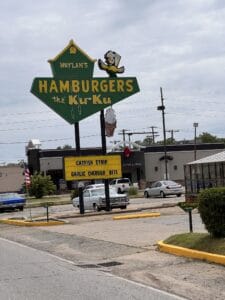 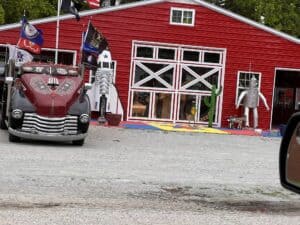 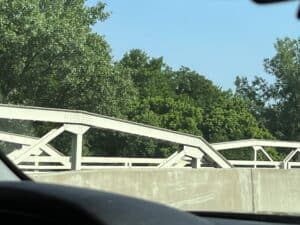 Creek Bridge. I took a picture but we hut a bump as I was taking it so you just see the top of the bridge), Foyil (completely missed this one), Claremore and Catoosa.       Catoosa is like a suburb of Tulsa so we were now in Tulsa. We went to our Campground and got there earlier than other night.  Yeah a quick setup and dinner and relax time.  No no no.  This is again an Army Corp of Engineers campground and we were right on Heyburn Lake.  So so pretty. We had a wierd drive to the campsite that we actually missed the first time around and had what appeard to be a straight backup into the sight.  God things are never as they seem for us.  We backed in fine, leveled great and then went to unhook from the car.  But the trruck was higher that the trailer. And everytime we tried to backup the truck to loosen the trailer from the ball, the trailer was pushed back. We finally just backed the trailer up more so the truck was on less of and incline and was able to unhook the trailer.  The level wasn’t as perfect but we were tired and had spent 40 min at this already.  But we finally finished, set our chairs up outside the door and had a much deserved glass of wine.  Dinner was a quick stuffed baked potato. We walked the dog and went to bed. 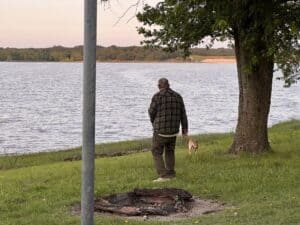 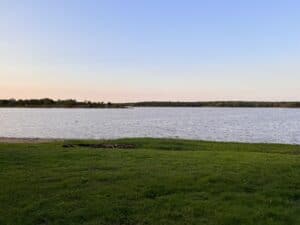 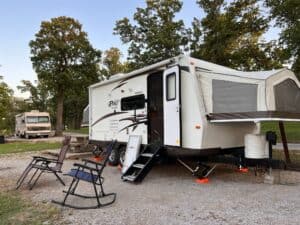 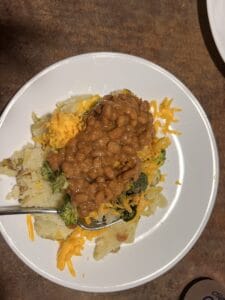